2008 Programme
Choose a Theme
Archives
Are we becoming a nation of alcoholics and binge drinkers?
Sunday 2 November, 2.00pm until 3.30pm, Lecture Theatre 1 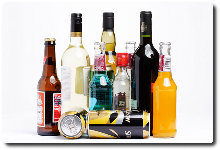 Hot on the heels of obesity and passive smoking, the nation’s drinking habits have become a high profile cause for concern. In November last year the Nuffield Council on Bioethics issued a report stating that alcohol consumption ‘has become a huge public health problem in the UK’ and is an ‘area where the Government should do more’. According to the report the annual number of deaths due to medical conditions caused by alcohol in the UK ‘doubled from just over 4,000 in 1991 to over 8,000 in 2005’.  According to the Association of Public Health Observatories, alcohol consumption in England contributes to an average reduction in life expectancy of 9.9 months for men and 4.4 months for women. They also point out that alcoholic poisoning, violence and accidents, alcohol-induced pancreatitis, chronic liver disease and stomach cancer all reduce wellbeing and add to the costs of the NHS by £1.7 billion.

It would seem that the government’s attempt to emulate the continent and create a cafe society through 24 hour licensing has failed, with more people vomiting or being violent in public instead. Supermarkets have been slammed for fuelling bad habits through loss leading alcohol promotions, with Julian le Grand, the chairman of Health England, complaining that alcohol has become “like adult candy”, with customers seduced into buying cut-price drink during their weekly shop. But from binge-drinking teenagers to Surrey commuters, from pregnant women to those attempting to conceive, alcohol consumption is a contentious and politicised issue.

What is known about alcohol consumption and health, and how does this compare to what is commonly said by politicians and health officials? What is the evidence that drinking habits in the UK are a significant threat to the nation’s health? Is public drinking a problem of personal health or is it really about public order? Is medical evidence being presented one-sidedly in service of moralistic political objectives?

Recommended readings
Regulation will not be popular, but it's necessary

There is so much media interest in alcohol misuse in general, and binge drinking in particular, that it is easy to forget that the majority of the adult population drink responsibly and will continue to do so, whatever drinking messages they are bombarded with.

Good this week, bad the next ... alcohol

A guide to navigating the conflicting findings of medical research

The number of people admitted to hospital in England due to drinking alcohol has more than doubled in the past 12 years, NHS figures revealed today.

So booze isn’t bad for Baby?

“Occasional binge drinking by mother does baby little harm” was a headline that shrieked, because it felt so counter-intuitive.

The measurement and recording of alcohol-related violence and disorder