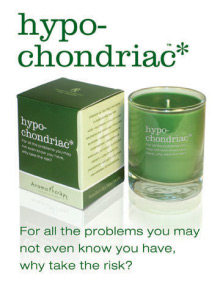 We live in a state of perpetual health-checks. From government screening programmes to campaigns encouraging us to examine our breasts and testicles on a regular basis, scrutinising our bodies for signs of disease has become routine. We can buy DIY health kits to check our liver function, blood pressure or cholesterol, and are issued with a constant stream of official advice about how we can modify our diet and lifestyles to ward off disease and death.

But how scientific is the rhetoric of ‘healthy living’? How far do screening programmes and lifestyle advice actually help to improve our health? Is awareness raising about terminal illness a practical step in the fight against cancer - or does it rely on a superstitious notion that we can ward off disease through looking out for it? Have you wondered why an increasing proportion of the otherwise healthy population now seems to be suffering from vaguely-defined syndromes or disorders; why alternative medicine continues to do a roaring trade despite scientists continually disputing its medical benefits; and why middle-aged men with heartburn take themselves off to Casualty with suspected heart attacks?

Should we aspire to ‘wellness’; or is our obsession with healthy living creating a population of patients-in-waiting among the worried well, causing a drain on NHS resources and a bigger one on the human spirit. The session will be followed by a drink in the bar.

Sales of health self-testing kits are soaring. But can you trust the results? Three Times writers put the tests to the test

Buses fitted with medical testing kits are to be sent into communities to give health MoTs to patients, under new Government plans.

A guide to why scans and health tests for well people aren’t always a good idea,

Ignore these scaremongers - I'm not giving up my bacon butties!'

So now it's the great war on bacon. After the battles against smoking, alcohol and being fat, the not-so-innocent breakfast staple is the latest target of the increasingly preposterous health police.

Millions of Britons are denying themselves their favourite foods because they wrongly think they are bad for them. They are victims of wholly imagined ailments that stop them enjoying many dishes.

Playing Balls - why are men becoming obsessed with their health?

Britain's National Men's Health Week in June 2006 kicked off in London with the opening of the 'Dick Monologues', a show in which 'men were invited to stand up and discuss their relationship with their penis and anything else that springs to mind – including mental health issues and what has worked for them'.

Transcript of opening plenary speech at the Health: An Unhealthy Obsession? conference.

The Tyranny of Health: Doctors and the Regulation of Lifestyle

This book exposes the dangers of the explosion of health awareness for both patients and doctors. The author argues that we need to establish a clear boundary between the worlds of medicine and politics.