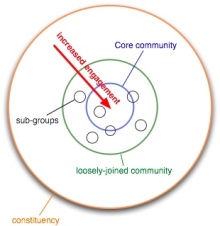 In the US, Hillary Clinton is worried about ‘fractured communities’, while Barack Obama wants to ‘construct communities’. In the UK, Gordon Brown declares that immigrants should perform community work before being granted citizenship, while the Archbishop of Canterbury suggests that sharia law might improve community relations. Communities are now charged with everything from ‘preventing extremism’ and building ‘respect’ to encouraging ‘sustainability’; and the first graduates have emerged from the Government’s new accredited course in Community Leadership. But what do politicians and commentators mean when they talk about ‘community’?

Why are so many different debates moulded around the issue of ‘community’? Does all the talk of creating ‘active citizens’ and building ‘community cohesion’ in fact reflect a concern with fragmentation and a loss of control. This session marks the launch of the book Future of Community: Reports of a Death Greatly Exaggerated. From the new East End to virtual communities, what does ‘community’ mean today?


Recommended readings
The Future of Community: Reports of a Death Greatly Exaggerated

We are constantly being told that communities are under threat, that we are losing a 'sense of community'. This book finds that the notion of community in Britain is actually threatened by the very thing intended to protect it; relentless government and third party interventions bent on imposing their own forms of social cohesion on the population.


How do you know if it's an eco-town?

The government’s eco-towns initiative has started a number of debates – about their size and the choice of locations, and how lessons from new towns can be applied to the existing built environment.

We may admire the Nordic way, but don't try to import it

It's easy to romanticise the welfare priority and democratic values, but it's all built on very un-British restrictions of freedom

A decade of regeneration policies has failed to stop the inequality of opportunity between towns and cities in the North and those in the South East increasing.

Councils can help spread the joy

I suspect the New Right was on to something in the 80s when they complained that Britain was creating a ‘dependency culture’. They only got it half right, and for all the wrong reasons.

In place of drums and samosas

In a 'super diverse' Britain, the key to social cohesion is not a new British 'identity' but tackling poverty and inequality