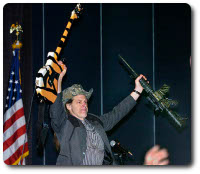 The USA was the first nation in history founded on an idea rather than an accident of geography or political fortune, and has often been a source of inspiration for the rest of the world. Although racially divided, it remains in principle a ‘creedal’ rather than ethnic nation. Faith in progress, an orientation toward the future, a sense of unlimited possibility, opportunity, equality, and individual freedom have all been central components of the American creed. Indeed, the combination of liberal individualism and democratic egalitarianism can be seen as a peculiarly American achievement – the very basis of American exceptionalism.

But what do these values mean and have they stood the test of time? What happens when freedom comes into conflict with other American ideals such as the family, Christian piety, or patriotism itself? While the USA is often seen as the aggressive force behind capitalist globalisation, many Americans are fearful of the effects global market forces are having on them. America is a ‘nation of immigrants’, but debates rage about the extent and desirability of contemporary immigration.

Some argue that the apparent libertarianism of the constitution was in fact premised on the shared values of the founding fathers. Does the ethnic diversity and cultural pluralism of contemporary America stretch the limits of liberty? Is it possible to be a proud American while rejecting such staples of Americana as church-going, baseball and apple pie? Europeans sometimes disdain the USA as the land of soulless materialism, religious fundamentalism, chronic obesity and high school shootings. But is there still something in the American idea to inspire the rest of the world in the 21st century?


Recommended readings
There is no common America

As national divides grow, my kind of American is living in a state of hope and fear

Richard Nixon and the Rise of Affirmative Action: The Pursuit of Racial Equality in an Era of Limits

Yuill contends that although government-enforced affirmative action did not fit into the postwar, growth-oriented liberalism, it emerged as an important regulatory policy blueprint in an era increasingly characterizeed by diminished horizons for social policy.


Can Identity Politics Save the Right?

Fresh out of other options, the Republican Party's bid to regain power is likely to come in the form of a pander to "real Americans."

What Does It Mean To Be An American?

The United States is far less divided on immigration than the current debate would suggest. An overwhelming majority of Americans want a combination of tougher enforcement and earned citizenship for the 12 million illegal immigrants in the country.

The Naked Crowd: Reclaiming Security and Freedom in an Anxious Age

In the aftermath of September 11, 2001, Americans have been willing to give up their liberty, not for security, but for the illusion of security.