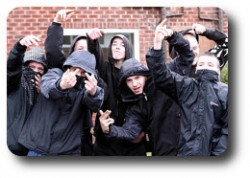 We are regularly told Britain is in the grip of gun and knife culture and gang warfare, with young people in particular both committing violent crime, and suffering as victims of it. More generally, ‘teenage antisocial behaviour’ is often portrayed as one of the greatest problems afflicting the nation. Young people’s drinking habits are increasingly understood as a social problem today, and the government has announced it will crack down not just on underage drinking, but also 18-24 year-olds’ drunken behaviour.

But, statistically, violent crime is falling, and surely young people have always misbehaved: only rarely has their behaviour been interpreted as a serious threat to society. Do concerns about youth crime and antisocial behaviour reflect a breakdown of respect and discipline, or are we in the grip of a moral panic? Are liberal critics blind to the harsh realities of crime and disorder? Either way, there seems to be a problem with adult authority. Have we lost the confidence to tell young people what’s right and wrong?

A number of police forces in England and Wales have been undercounting some of the most serious violent crimes, the government has admitted.

Another Friday night, another teenager stabbed to death in a fight outside a nightclub. It was in Croydon, south London, but it could have been Lambeth, Southwark, Edmonton or any of the capital's other locations that have seen young men come to violent ends this year.

Anti-terrorism laws are being used to catch out youngsters attempting to buy alcohol in the Burton area.

The Government has been accused of being too quick to criminalise youngsters for petty offences that could be dealt with outside the legal system.

Adults have surrendered to the Lords of the Flies

The interesting question is why adults feel so cowed and uncertain. It wasn’t the case a generation ago. Anyone over 45 will recognise that they grew up in a world where a sense of adult authority was taken for granted.

From the garotte to the flick knife: a brief history of juvenile crime

A quick trawl through The Times archive shows that the modern concern about out-of-control youth is far from a new one.

Adults 'scared to go near kids'

Many adults are afraid to interact with children for fear of being labelled as paedophiles, a report has claimed.

Antisocial behaviour is becoming a universally accepted problem and one that dominates the political and popular imagination. By providing a new criminological framework for understanding the fear of crime, this book reposes the increasingly important debate around antisocial behaviour and the internationally understood idea of moral panics.


Disconnected: Why Our Kids are Turning Their Backs on Everything We Thought We Knew

In the spirit of No Logo and Fast Food Nation, Disconnected is the author's journey into modern youth culture, meeting and speaking to hundreds of kids on the way.