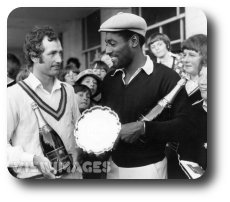 ‘What do they know of cricket who only cricket know?’ CLR James

‘A large proportion of Britain’s Asian population fail to pass the cricket test. Which side do they cheer for? It’s an interesting test. Are you still harking back to where you came from or where you are?’ Norman Tebbit

From England to India and the Caribbean, cricket more than any other sport has been associated with politics and national identity. Norman Tebbit’s infamous ‘cricket test’ of loyalty for immigrants to the UK, is one of the most high profile examples of the mixing of cricket and identity. Why has cricket been so tied in with politics and identity?

During the heyday of the British Empire, cricket was the unquestioned national sport at home, while Lord Harris in India and other colonialists sought to use cricket to inculcate the values of Empire in native populations. This became a double-edged sword, as the colonial subjects improved at the sport and often beat the English on the cricket pitch, which was emblematic of their struggle against colonial rule. When the great West Indian teams of the 1970s and 1980s trounced the country that had given them the game, it signified the transformed relationship between the respective nations. Meanwhile Britons of Asian descent tended to support the countries of the subcontinent rather than England, to the consternation of Norman Tebbit.

Today, cricket has lost out to football as England’s national sport, and power is fast shifting from Melbourne and Lords to Kolkata and Mumbai, as the new Indian Premier League attracts the world’s great players. Does this reflect broader changes in the fortunes of nations, or is it a purely sporting phenomenon? Is cricket still an ‘English’ game? What is the future for cricket in the 21st century?

With yet another India-Australia series upon us, it is perhaps apt to look back at how cricket helps us explore Indo-Australian relations for over a century. This is because cricket was and remains a cultural form adopted and adapted by both nations, in order to fulfil social, political and economic aspirations and imperatives.

Part memoir of a West Indian boyhood, part passionate celebration and defence of cricket as an art form, part indictment of colonialism, Beyond a Boundary addresses not just a sport but a whole culture and asks the question, 'What do they know of cricket who only cricket know?'