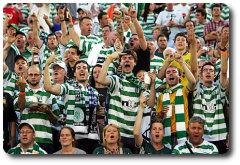 British football crowds have always been known for their banter towards players, managers and opposing fans. Football terraces have traditionally been places to let off steam and behave in a way that would not be acceptable in other public spaces. Creating a hostile atmosphere often helps give your team the edge in a close encounter. Recently, though, some worry things have gone too far. They say the level and personal nature of the abuse is worse than in previous times, and that something needs to be done. The unpleasant invective directed by some Colchester United fans towards Norwich City manager Glenn Roeder, who had suffered a brain tumour, is a case in point. And while racist chanting is largely a thing of the past, the continued sectarian chanting between Rangers and Celtic fans in Scotland is seen by many as typical of the backwardness of football fans.

Is the problem of abuse in football getting out of hand, or are the recipients just becoming thin-skinned? Was the traditional terrace culture somehow more civilised, with banter infused with a dose of humour, however cruel? Or is this a nostalgic view, overlooking the menace of hooliganism and racism? Some argue all-seater stadiums and ‘family-friendly’ policies have turned the atmospheric stadiums of old into sanitised theatres with intensive surveillance and stewarding. At the same time, some fans have become so obsessed with football, even living their lives through it, that they no longer know where to draw the line. Do we take football, and ourselves, too seriously?

England fans have the right to boo, sing and swear

An awful lot of football chants are difficult to defend

Portsmouth intend to make an official complaint to the Football Association over insults aimed at Sol Campbell by Spurs fans at Fratton Park last Sunday.

Celtic chairman John Reid has condemned as racist one of the songs chanted by fans of Glasgow rivals Rangers at the recent Old Firm derby.

Football authorities must act to eradicate the mindless minority

The gradual dissolution of sectarianism has given rise to a new strain of intolerable behaviour: politically and religiously motivated classroom clypeing.

Pride not prejudice: what we can teach Europe about tackling racism

Trevor Phillips, chairman of the Equality and Human Rights Commission, is moved to describe British football as “a European role model for tolerance in sport”.

Is Margaret Hodge right about the Proms?

We should be proud of the Proms, but not the tired, jingoistic rituals perpetuated by the traditional Last Night

Three fallacies provide themes which run through the book: the notion that football hooliganism is new, that it is a uniquely football problem, and that it is an English phenomenon.