2008 Programme
Choose a Theme
Archives
Is language being corrupted by managerial politics?
Sunday 2 November, 10.00am until 10.45am, Henry Moore Gallery Breakfast Banter 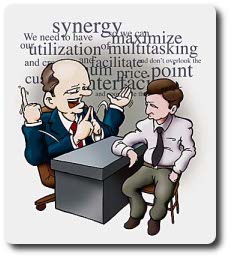 The language of politics today seems to be all hat and no trousers, with politicians muttering about ‘inclusive diversity culture’ and the ‘values vacuum’, or holding forth on ‘sustainable development’, ‘extraordinary rendition’ and ‘joined-up government’. From the smooth on-message spin of New Labour in its heyday to the sibylline malapropisms of Bush and Rumsfeld, we all agree politicians’ words mean less (and perhaps more) than they seem to. Politicians are liars, circumlocutors or blathering fools, and worthy candidates for little more than ‘bad English’ awards.

Dare we ask, then: what’s wrong with political jargon? Are new-fangled buzzwords necessarily about obfuscation, or do they simply reflect the fast-changing character of contemporary politics? Do politicians use managerial terminology to pull the wool over our eyes, or does obscure language simply reflect the growing distance between the political class and the public? The emergence of Barack Obama in the US has led to suggestions that inspiring political rhetoric is making a comeback. Is this to be welcomed, or are silky speeches just another species of spin? Shouldn’t we judge politicians more by what they do than what they say they think they mean?

Down with cant: up with rhetoric!, Angus Kennedy

Recommended readings
Barack Obama the speechmaker is being rumbled

There is a yawning gulf between what the Democratic candidate says and how he has acted. That's why the race is so close.

Use buzzwords to be cited, study suggests

Is 'robust' the new 'clustering'? Hannah Fearn on an anthropologist spotting trends in vocabulary

Council leaders and their staff have been urged to avoid using more than 100 "non-words" identified on a list of clichés and jargon.

Unspeak is language as a weapon. Every day, we are bombarded with those apparently simple words or phrases that actually conceal darker meanings.


Politics and the English Language

Most people who bother with the matter at all would admit that the English language is in a bad way, but it is generally assumed that we cannot by conscious action do anything about it.

"The audience were the stars of the Battle of Ideas - engaged, informed and enthusiastic. As a panellist, I felt both ashamed and educated. Exactly as it should be."
John Street, professor of politics, University of East Anglia