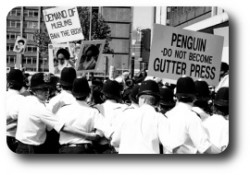 This year is the twentieth anniversary of the publication of Salman Rushdie’s novel, The Satanic Verses, which led to one of the most famous free speech controversies of modern times. Deemed offensive to Muslims because of its portrayal of the prophet Mohammed, the book provoked large demonstrations by British Pakistanis and Bangladeshis, some of who publicly burned copies of the book. The book was banned in India, and in February 1989 the Ayatollah of Iran issued a fatwa calling for Rushdie’s head. As a result, The Satanic Verses became a totem of the battle for free expression across the world.

Today, the controversy continues to illuminate not so much a clash of civilisations as fault lines within the West itself. The response to the fatwa first revealed many anxieties familiar in contemporary debates about identity and ‘social cohesion’. In particular, the spectre of multiculturalism has haunted the book’s wider reception. Many believe that home-grown terrorism is proof that policies designed to quell discontent and minimise social atomisation, have achieved the opposite effects.

The journey from the Ayatollah’s fatwa to self-directed jihad waged by a small sect of British Muslims is complex. What does the Rushdie affair really tell us about the origins of radical Islam? And does the West still have an appetite for intellectual freedom?

Rushdie says he is an atheist who finds dead religions “much more attractive” but says he has nothing against true believers until their faith spills over into the public sphere and becomes “my business”.

Self-censor and be damned!

Rushdie's critics lost the battle to ban his book but they have won the war.

Quick, somebody buy a wreath. Last week marked the passing of multiculturalism as official government doctrine. No longer will opponents of this corrosive and divisive creed be silenced simply by the massed Pavlovian ovine accusation: “Racist!”

The race debate: nothing to do with race

Yes, African-Americans are biologically different from Ashkenazi Jews, but race is utterly useless for scientific research

The best we can hope for is tolerance

John Gray, Britain’s foremost political philosopher, says that Ruth Kelly’s new campaign against Islamic extremism is doomed because it exaggerates the scope for cohesion in our fragmented modern world

Come to Londonistan, our refuge for poor misunderstood Islamist victims

Truly moderate Muslims are finding that the host community is cutting the ground from under their feet and delivering them into the hands of the extremists. This is a deliberate policy of riding the Islamist tiger. But those who ride a tiger may get eaten.

No question about it: it’s harder to celebrate polyculture when Belgian women are being persuaded by Belgians “of North African descent” to blow themselves — and others — up.

David Goodhart's essay challenging liberals to rethink their attitudes to diversity and the welfare state has provoked a bitter debate among progressive thinkers.

"The audience were the stars of the Battle of Ideas - engaged, informed and enthusiastic. As a panellist, I felt both ashamed and educated. Exactly as it should be."
John Street, professor of politics, University of East Anglia