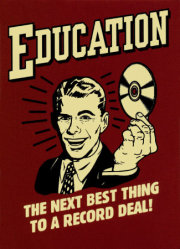 Education, education, education: we hear the mantra all the time, but do we really know what education even means? Can we tell the educated person from the ignoramus? How? Are there metrics and standards we can apply to education? Are people more educated today than they used to be, or are the barbarians inside the school gates?

To decide just what it does mean to be educated nowadays, our panel will take part in a balloon debate. Will you vote for foreign languages to stay in the balloon? Or is it imperative that one knows one’s classics from one’s canon? Does travel broaden the mind, or should we jettison it in favour of scientific understanding or culture, philosophy and general bookishness? Come and have your say as we try to separate the well educated from the merely well trained.

From age eight, primary school pupils will be learning about puberty and the facts of life, and about the effects of heroin and cocaine

Recalcitrant pupils given a wake-up call with seminar-style lessons

Naughty or shy pupils who use the back of the classroom as a haven for daydreaming or mischief could be in for a nasty shock if a teaching scheme being adopted by a leading educationalist takes off.

Drawing on the insights of the ancient Greek philosophers, "Wellbeing" challenges us to think about our values and beliefs, to discover a sense of place in the universe, and to work out how to give ourselves to love and life.


Who says that travel would broaden Sarah Palin's mind?

"A British pupil can go through the entire school system and get the top marks in English and English Literature without knowing that Spenser, Milton or Pope ever existed."

The new learning that failed

On the value of classical learning.

Education is a practical activity. It is concerned with means to be employed or devised for the achievement of an end.