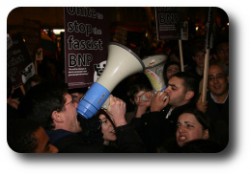 ‘No Platform’ policies have long been established in students’ unions in a bid to prevent the rise of rightwing groups. This means unions refuse to provide or share a platform with anyone from organisations deemed as fascist or racist. Recently, however, No Platform policies have come under attack in some unions on the grounds that they inhibit free debate. The students’ unions of Universities of East Anglia, Bath and Warwick have voted to abandon No Platform. A number of others have decided they oppose the policy too, arguing that the best way to fight racists is to debate them. Proponents of the policy argue there can be no meaningful debate with fascists or racists; that at best those who argue for open debate are misguided, and at worst they are aiding the rise of groups like the BNP. Is it time to ditch No Platform and argue freely, or would this open the floodgates for racism on campus?


Recommended readings
Time to no platform 'no platform'

Not before time there’s a growing backlash against the NUS thought police.