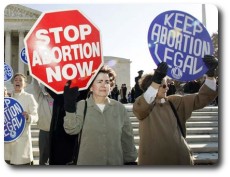 Abortion was once a debate with two clear sides. The anti-abortion lobby condemned it as murder, while the pro-choice lobby argued that access to abortion was crucial to women’s equality. But in recent years, the abortion issue has been emptied out of both its political and moral content. Those opposed to abortion often refuse to condemn abortion outright, focusing instead on the problems of the number of abortions, late abortions, and disputed evidence about the negative impact of abortion on women’s physical and emotional health. The pro-choice lobby has also been criticised for ‘hiding behind the science’, focusing its energies on countering the anti-abortionists’ claims and evading the presentation of a positive case why women need access to abortion as early as possible and as late as necessary.

Science can and should inform the medical practice of abortion, but it can never tell us whether abortion is right in principle. It is time to put the politics and morality back into the abortion debate, through tackling the hard arguments. When does life begin? How far should we take ‘a woman’s right to choose’? What kind of legislation on abortion should we expect in a civilised society?

The church of England is encouraging Britons to get married - so they can enjoy a 'spectacular' sex life.

Women should not need the permission of two doctors to have an abortion, top medical law and ethics specialists say.

Abortion: The dark secret I carry in my heart every day

Abortion: I'd never really thought about the word until it happened to me. Before that, it was something vaguely frightening and shameful that a couple of women around me had experienced.

Children as young as 5 may be taught about relationships

MPs have voted to retain 24 weeks as the upper time limit for abortions. But what are the issues in the debate and how has the law changed over the years?

Abortion: A solution to a problem

Should Abortion Be Prevented?

The president of CFFC questions whether we should do more to prevent the need for abortion.

The abortion debate asks whether it can be morally right to terminate a pregnancy before normal childbirth.