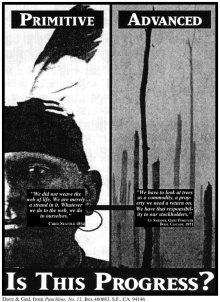 The United Nations Environment Programme wants us to ‘Kick the CO2 Habit’. Employing the language of fad diets and public health campaigns, the UNEP asks us to make do with less, give up long-haul flights, power-showers, air conditioning, and other fruits of material progress. Increasingly, developments like the proposed new runway at Heathrow, or ever-cheaper battery-farmed chickens, are seen as ‘the wrong kind of progress’. Ambivalence about progress is equally apparent in reponses to the extraordinary and relentless economic growth of China and India. NGOs claim that if everyone in those countries attains a Western lifestyle, we will need several additional planets. Is it time to rethink what we mean by progress?

Historically, many thinkers have seen material progress as the very basis on which our civilisation rests: when it takes hours to run a hot bath or catch a chicken, there is little time for leisure, for enjoyment of the arts and culture. But critics today warn that when man interferes with Nature, there are inevitably unpleasant side-effects and unexpected consequences, from pollution to epidemics. Moreover, it is argued that ‘so-called progress’ corrodes community and traditional ways of life. The supposedly individuated, unhappy, and selfish consumers of the West are seen as proof that progress delivers at best mixed blessings. LSE professor John Gray among others has gone so far as to say that ‘progress is a myth’. Are then millions of people in the emerging economies - envious of Western living standards and attendant liberties – really to restrict their aspirations to the altogether humbler goal of ‘sustainable development’?

Is there anything more to progress than prosperity? Can material progress foster all that is best in humanity, fuelling the creativity that has accompanied economic development – from cathedrals to symphonies, poetry to cinema – throughout history? Or is progress a nightmare from which we need to be shaken awake?

Slam-Dunk the Funk - Defending Progress in the Age of Environmentalism, Lee Jones

Last month I made a fitted shirt myself, on a treadle-powered sewing machine bought on eBay for just £8, and using a £5 offcut of material, with only a little help from my wife's wonderful great-aunt Peggy.

A 'Green New Deal' can save the world's economy, says UN

Top economists and United Nations leaders are working on a "Green New Deal" to create millions of jobs, revive the world economy, slash poverty and avert environmental disaster, as the financial markets plunge into their deepest crisis since the Great Depression.

The Enemies of Progress: Dangers of Sustainability

This polemical book examines the concept of sustainability and presents a critical exploration of its all-pervasive influence on society, arguing that sustainability, manifested in several guises, represents a pernicious and corrosive doctrine that has survived primarily because there seems to be no alternative to its canon: in effect, its bi-partisan appeal has depressed critical engagement and neutered politics.


Carbon offsets deliver where it matters

Remember when carbon offsets were cool? When everyone from Coldplay to Fifa banged on about their carbon neutrality?

Waiting for the lights to go out

We've taken the past 200 years of prosperity for granted. Humanity's progress is stalling, we are facing a new era of decay, and nobody is clever enough to fix it. Is the future really that black, asks Bryan Appleyard