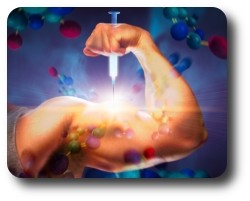 No international sporting event is complete without a drugs scandal. From the Olympics to the Tour de France, complaints of cheating and doping seem to threaten sport’s integrity. Drugs have been ever-present on the sporting agenda since the athletics world was rocked by the Ben Johnson scandal at the Seoul Olympics and East German competitors were found to be taken stimulants in the 1980s. This year, the furore over the British sprinter Dwayne Chambers once more highlighted the issue. The athletics authorities have made it clear that they don’t want him representing Great Britain ever again, despite his having served a two-year ban for taking THG in 2003. With drug testing ever more sophisticated, more and more athletes are falling foul of the clampdown. At the 2004 Athens Olympics a gymnast was denied a gold medal for taking two Nurofen tablets.

Those who feel the campaign has gone too far point out that R&D departments frantically compete to develop the latest technological devices to improve the performance of their countries’ athletes. Whether it’s computer-designed swimsuits, bikes equipped with carbon nanotubes, infrared spectroscopy to probe the oxygenation status of muscles and brain or high-oxygen atmosphere - ‘hyperoxic’ – training, today’s modern interventions seem at least as much of a challenge to the ‘level playing field’ ideal as any pharmacological aids. Are athletes from advanced rich countries cheating by using technological and scientific enhancements not available to their peers from poorer countries, regardless of drug-taking? If an athlete aims to be the fastest or strongest person on earth why are they not allowed to take whatever will help? Or is drug taking just plain cheating to make up for a lack of skill or effort?

The International Olympic Committee has revealed it will retest 5,000 doping samples from the Beijing Games to check for traces of a new blood-booster drug.

Let them take drugs - the safe ones

There is nothing quite like the hush that descends over a stadium when eight men are limbering up to do battle for the mythic title “fastest man on Earth”.

Athletes as Role Models in the Steroids Era

Doping control in sport is a relatively recent phenomenon. The first compulsory Olympic drug testing took place at the Winter Olympic Games at Grenoble in 1968, and in the thirty plus years since then anti-doping policy has been based almost exclusively on what might be described as a punitive or 'law and order' approach.

Beyond Therapy: Biotechnology and the pursuit of happiness

Human beings desire not only "better children," we desire also to be better ourselves. Aspiration, born of the attractiveness of some human good and the energizing awareness that we do not yet possess it, is at the heart of much that we do and much that is admirable about us.

The President's Council on Bioethics, October 2003