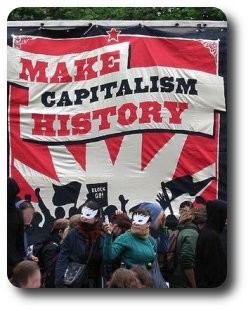 Following the sub-prime crisis, the credit crunch and the collapse of investment banking, events which have rocked the Western world over the past year, the boast that capitalism can deliver prosperity for all seems less than convincing. Margaret Thatcher’s famous claim that ‘There is no alternative’ (TINA), seemed triumphalist in its day, and accurately described the exhaustion of any left-wing challenge to the market, but it also suggested a lack of a credible moral case for capitalism. This lack is all the more glaring in the context of mounting economic problems.

Even before recent dramatic events, there seems to have been a growing cultural dissatisfaction with the market, not simply confined to fringe anti-capitalist protests, but discernable in mainstream politics and even business, which defensively insists on its ‘corporate social responsibility’. It has become fashionable to renounce both corporate greed and consumerism, and there are regular demands for governments to intervene and regulate the market to contain its worst excesses. Conspicuous consumption is accused of destroying the planet, wiping out indigenous cultures and corroding deeper moral values. Some critics argue capitalism actually makes us ill because of its relentless focus on acquiring ever more stuff, and suggest that individual happiness, rather than GDP, should be the measure of a healthy society. Always the solution seems to be that we should settle for less material wealth. But are we in danger of confusing anti-capitalism with disillusionment with modernity, and political criticisms of the system with moral condemnation of behaviour? Does today’s financial crisis show capitalism is unworkable as well as undesirable, and that we need to change to a more regulated and sustainable system?

The dynamism of the emerging economies appears to suggest capitalism can renew itself in new territories, and its sparkling promise still holds out the possibility of delivering the gains of modernity to millions. Is this a mirage, holding the developing world in bondage to greedy corporate interests? Can Western capitalism recover from today’s recessionary trends?  How do we counter and transcend the market’s demoralising effects? Can we aspire to a system that can meet the genuine needs of all?  What does TINA mean today?

Capitalism, the financial crisis, and us, Dolan Cummings

We're all capitalists now? Not any longer

An historic turning point has been reached: the West is ditching its faith in free markets and private enterprise

Capitalism has improved the lives of billions of people — something that's easy to forget at a time of great economic uncertainty. But it has left out billions more. They have great needs, but they can't express those needs in ways that matter to markets.

A contribution to an invitation-only blog discussing Bill Gates' Creative Capitalism speech, extracts of which will appear in a book of the same name, edited by Michael Kinsley and Conor Clarke.

The end of capitalism as we know it?

The Western world is in an economic crisis similar in scale to the oil shock of 1973. What we are seeing is nothing less than the unravelling of neo-liberalism – the dominant economic and ideological model of the last 30 years.

There is currently an epidemic of 'affluenza' throughout the world - an obsessive, envious, keeping-up-with-the-Joneses - that has resulted in huge increases in depression and anxiety among millions.