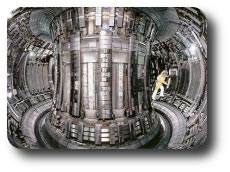 For several decades now, the possibility of nuclear fusion – producing energy by joining atomic nuclei rather than splitting them – has held the promise of cheap and clean power for all, without the waste produced by existing fission technology. But somehow fusion is rarely high on the agenda in debates about the future of energy. Arguably, recent technical innovations indicate a working fusion reactor is now a realisable project in the medium term. Several major projects - such as the European HiPER project – now exist with the goal of advancing this dream over the next ten years. Yet, perhaps surprisingly, the promise of cheap clean energy has not been universally welcomed. Some argue we have been here before, and the technological promise will simply not pan out. Others that the dream of fusion is an unwelcome and unrealistic mirage that encourages us to ignore the problems of climate change.

How close is this technology, and what does the current climate of thinking on fusion research tell us about today’s attitudes to energy? What part, if any, could or should fusion play in the future development of our society.

An alternative fusion project has been kicked off in Europe that would seek abundant clean energy using a colossal laser the size of a football stadium.

Laser heats up the fusion future

The world's most powerful laser has heated matter to a truly sweltering 10 million Celsius.

Fusion: Cheap energy for all? Power to the people?

The Brighton Salon was fortunate to have a distinguished panel of experts on Saturday March 1 for its contribution to the Brighton Science Festival: a discussion about new technology that may provide cheap and renewable energy for the world.

Hunting the holy grail of fusion

Last week a British initiative was agreed to unlock limitless energy. Can it work?