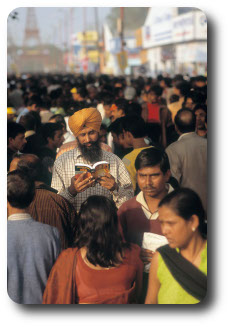 When a man is tired of London he is tired of life; and when a man is tired of life he moves to Paris to write a book about it. But other cities are keen to emphasise their literary heritage: Edinburgh was delighted to be named the UNESCO City of Literature in 2004, even if Ian Rankin’s Gothic murders and Irvine Welsh’s tales of squalor are not great tourist adverts. In 2008 Melbourne became the second CoL – to the great disappointment of the other contenders, including several newcomers in emerging economies, keen to stake their particular claims on the literary map. Should we celebrate the richness and variety of different cities, or does ‘the city’ remain a blank space in which to explore universal concerns?

With a 15-minute film, Kolkata City of Literature, commissioned by the British Council, directed by Soumyak Kanti De Biswas and Tanaji Dasgupta, with commentary by Aparna Sen and music by Neel Dutt.

Calcutta, for instance, produced the first Asian Nobel laureate in Rabindranath Tagore. It was here that Thackeray was born and Dickens's second son buried.

The French are remarkably gracious about being stereotyped by legions of English expats - but why don't any of them write about Britain?

The cancellation of its legendary book fair was a blow, but this most literary of cities still has plenty to excite readers.

A Letter from Berlin

I'm walking along Linienstrasse, a quiet residential street in the former East Berlin, on my way to work. It's a short walk, but it's taking a while, as I slow to check out the new graffiti. A Banksy! And sixteen new tags by Calyba, or Kalyba, a local graffiti artist so inept he can't spell his own name.

Use this literature hub to discover more about our projects, Edinburgh's literary landmarks, Scottish literature and search our events database to find out what's going on.