A brief history of gravitational waves 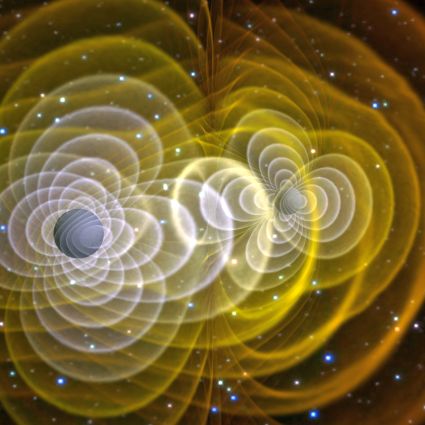 Earlier this year, physicists at the LIGO facility in the United States hit the headlines when they announced the first direct detection of gravitational waves. This confirmed that some of the most violent and energetic processes in the universe, such as neutron stars or black holes orbiting each other, create waves of distorted space radiating outwards like the movement of waves away from a stone thrown into a pond.

The discovery came exactly a century after publication of the theory which predicted it. But although that theory of general relativity made Albert Einstein everybody’s favourite genius, within physics the tide has long gone out on his ideas on the fundamental nature of reality. The conception of space and time he proposed was replaced by the model embodied in quantum mechanics and articulated at CERN, in which everything can be reduced to collisions in a storm of unpredictable, identikit particles whose position and speed can never be simultaneously measured.

So who is right? Quantum mechanics has been hugely successful in predicting phenomena. But do the building blocks of the universe really behave in the arbitrary manner described by quantum theory - does ‘God play dice’, to paraphrase Einstein’s objection - or is it simply that we don’t fully understand the fundamental physics? More importantly, how does this aspect of quantum theory interact with a wider mood in which reality seems unpredictable, even chaotic? Is quantum’s appeal in part that it fits with this mood, or has the theory helped to create it?

Does the renewed interest in Einstein suggests physics doesn’t have a ‘theory of everything’ after all, and might it open up alternative ways of seeing ourselves? Or do the major scientific models of the day actually have little or no effect on how humanity places itself in the cosmos anymore?

Physics teacher at The Physics Factory

Physics teacher at The Physics Factory

Everything you need to know about gravitational waves, Tim Radford, Guardian, February 2016

What Is The Future Of Gravitational Wave Astronomy?, Ethan Siegel, Forbes, June 2016