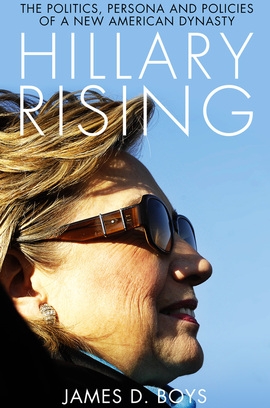 Listen to this session at the bottom of this page.

Who needs a new series of House of Cards when we have the real thing being performed before our very eyes? On 12 April 2015, Hillary Clinton formally announced her intention to run for US president in 2016, casting herself as the ‘champion of everyday Americans’. But in fact, Hillary Clinton heads into the presidential race with the worst favourability ratings of any Democratic nominee in recent history. Last year, she claimed ‘Victory is in sight!’ One year later, The Economist stated that ‘the Trump-Clinton outcome may end up resting on a few thousand votes in a handful of states’. Her illness in September cast further doubt on the certainty of winning the presidency. Will she now snatch defeat from the jaws of victory? And what drives the person behind the intriguing and polarising of political figure we see on the news?

Dr James D Boys first met the then US president, Bill Clinton, in 1995 and since then has produced some of the most in-depth and insightful writing on the Clintons as a force in US politics. Boys’ new book, Hillary Rising: the politics, persona and policies of a new American dynasty, draws on his extensive interviews with many of the Clintons’ closest political allies, as well as newly declassified documents from the Clinton archive, to provide a portrait of Hillary Clinton that Telegraph Books calls ‘a more nuanced and calculating character, closer to the truth’ of the woman who may soon be President of the United States.

Listen to the debate