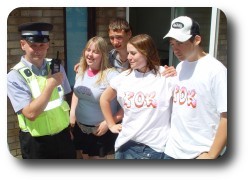 Youth engagement is a major focus of the government’s strategy to improve political participation at a time when parliamentarians fear for their mandate. Initiatives like the youth parliament, citizenship classes and the proposed lowering of the voting age to 16 are based on the idea that engaging youth in politics will solve the wider problem of political disengagement and lack of participation.

But will it work? Why would young people vote when politics appears superficial, alien and ineffectual? And does the focus on youth reveal the end of ‘adult’ political engagement, whereby ‘getting them young’ is the only meaningful option left? Is this yet another cynical attempt to raise voter turnout—by any means necessary? Increasingly, young people are taught that voting is a kind of a duty they have to the state, rather than a means by which people can take control of the direction of society. As Labour deputy leader Harriet Harman recently said, she wants to see teenagers ‘coming straight out of the citizenship class into the polling station’. Is this simply about harnessing youthful idealism? The tendency for citizenship classes to promote a prescribed set of values, as opposed to free thinking, suggests room for doubt.

Will this transformation of democracy lead to greater engagement or just greater participation in a meaningless process, and what effects will this have on our relationship with politics? Is our focus on youth an attempt to hide the real problem; a shortage of ideas on how to solve the very adult problem of engaging all of us in a meaningful politics?


Recommended readings
On the biggest issue of the day, Generation Y is being ignored

Far from turning teenagers into anti-social loners, video games help them engage with friends and community, says a report

Young people are likely to be a key force in the next general election, but what is it that influences them, and how do they view contemporary politics? I went to speak to a selection of 16 and 17-year-olds in Birmingham and Bristol

A study of the link between public participation and community cohesion

Folly of the 16-year-old voter

It looks as if Gordon is chasing 16-year-olds again. The new prime minister wants to put lowering the voting age to 16 back on the agenda.

The political potential of the internet lies not in connecting people to politicians, still less in online voting; it lies in the possibility of bringing citizens together to help themselves, argues a veteran of online politics

The RoutledgeFalmer Guide to Key Debates in Education