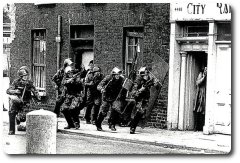 The British government this year set up the bizarrely titled ‘Consultative Group on The Past’, led by former Church of Ireland primate Lord Robin Eames and former Policing Board vice Chair Denis Bradley, charged with the unenviable task of proposing ways of dealing with the ‘legacy of the Troubles’ and finding a commonly agreed way of defining the conflict. Traditionally, Republicans argued the IRA was waging a legitimate campaign against occupation, while Unionists and the government branded them terrorists. More recently, influential revisionist historians like Paul Bew and Roy Foster have emphasised the sectarian character of the conflict, rather than its political content.

How have recent events, from the peace process to the introduction of a power-sharing government at Stormont, affected the way we interpret the past? Do the victors get to write the history of the Troubles; do new interpretations simply reflect the prejudices of the present? Why did young people join the IRA, and what kept the conflict going for so long? Should we seek to reassess the conflict, or is it time to move on and forget?


Recommended readings
A delayed appetite for the facts

Why is the British left so shocked about the events in Northern Ireland portrayed in Steve McQueen's powerful film, Hunger?

Who really brought peace to Belfast?

While politicians get the credit for stabilizing Northern Ireland, we should be more grateful to the civil servants – and the spooks

The New Politics of Sinn Féin

The book explores how the Republican movement has changed from an anti-state insurgency to a potential partner in governing the state it was pledged to destroy. In particular, the book attempts to consider the origins of what has become known as 'New Sinn Fein'.


The real lessons of Ulster

The Northern Ireland conflict is now fought over the lessons of the Troubles. One apparent lesson is that only extremists can make deals stick. But perhaps the real conclusion is that the late-colonial British did not properly study their own history