2008 Programme
Choose a Theme
Archives
What happened to the Zionist dream?
Sunday 2 November, 11.00am until 12.30pm, Café 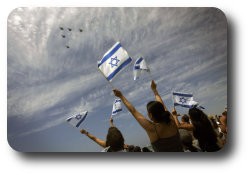 Despite its leaders’ sometimes bellicose rhetoric and international reputation for intransigence, on closer examination Israel seems to be having an identity crisis in its sixtieth anniversary year. Never-ending political crises and growing economic inequalities beg the question – does Israel risk imploding from within?

In recent years, there has been a slow-down in Jewish immigration from the disapora, and most new arrivals are less motivated by the idealism of the early settlers. Young Israelis’ lack of enthusiasm for serving in the Israel Defense Forces – once a crucial aspect of Israeli identity – is another indication that the Zionist ideal lacks resonance today, an impression reinforced by the decline of the kibbutzim, once a rite of passage for idealistic young people from around the world. Meanwhile, growing tensions in relation to the rise of the ultra-religious raise questions about what it means to be Jewish, and to live in a Jewish state, suggesting that Israel is as vulnerable as any other nation to the corrosive effects of identity politics.

Many Western critics suspiciously interpret Israel’s every move as motivated by an expansionist agenda, but arguably the state has already compromised key tenets of Zionism in undertaking the peace process. With the ‘Islamification’ of the Palestinian movement, and the increasing ambivalence towards Israel of the US, even the significance of the Arab-Israeli conflict cannot be taken for granted. What is the true character of the Israeli state today and what is revealed by changing attitudes to Israel in the West? As Israel celebrates its sixtieth birthday, has the ‘Zionist dream’ been fulfilled or shattered?


Recommended readings
What next for Israel?

The 60th anniversary of the State of Israel received significant media coverage in France, exceeding in some newspapers and magazines the attention given to the 40th anniversary of May ’68. Some of the staunch advocates for Israel, such as Marek Halter in Paris Match, insisted on calling this event the anniversary of ‘independence’, as if the Jewish presence in Palestine has been continuous over the past two thousand years.

A City in Surplus to Western Modernity

Tel Aviv, a Shrine for Exiles

Jabotinsky, Weizmann, and the roots of the most contentious communal struggle on earth today

Increasingly, Israel is handing over its 'Judaisation' project to private firms - leading to a corrosion of accountability.

As Israel Prospers, Some Fear Its Defenses May Grow Soft

"If Israel is a shopping mall in a jungle of extremism," says columnist Ari Shavit of the Ha'aretz newspaper, "the challenge is keeping the mall going from within, while protecting it from without."

Elvis in Jerusalem: Post-Zionism and the Americanisation of Israel