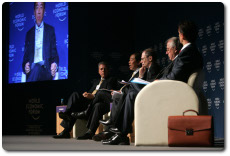 Your chance to quiz renowned experts, economists and business leaders on the significance of the BRICs – from their impact on the West to their positive or negative influence on Africa and the underdeveloped world -  during a fast-paced and thoughtful end of day Question Time style session.

How do emerging economies as diverse as Cambodia, Slovenia, Dubai, Angola, Panama and Mexico measure up to the giants of India and China? For the first time since the Industrial Revolution, is the centre of the world economy turning away from the developed world?

Will the proclamations of the ‘end of history’ and the victory of Western liberal capitalism made in the wake of the collapse of the Soviet Union prove to be premature? Will the war on terror become little more than a footnote in history, overshadowed by the rise of the emerging economies? Is China’s presence in Africa an opportunity for the continent or new imperialism in action? How will the dynamic growth of the developing world shape the political landscape of the 21st century?


Recommended readings
Into the storm

China 'can be engine of growth'

The economic crisis of 2008 is rooted in the so-called "global imbalances", whereby the West borrowed too much, funded by Asian savings.

Silver lining up for grabs

Despite unprecedented and co-ordinated actions by governments and central banks around the world to boost liquidity and support the financial sector, investors remain sceptical.

Will emerging economies change the shape of global finance?

After more than a year of relatively small spillovers from the financial turmoil in advanced economies, equity prices in emerging markets succumbed to the dramatic worsening of financial distress in mid-September 2008.

Over the next 50 years, Brazil, Russia, India and China—the BRICs economies—could become a much larger force in the world economy. We map out GDP growth, income per capita and currency movements in the BRICs economies until 2050.