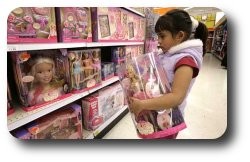 Dubbed ‘corporate paedophilia’ by some campaigners, advertising stands accused of corrupting young minds and turning children into either obese couch potatoes or anorexic wannabe celebrities. Youngsters apparently now spend more time watching TV than they spend in school, see more than 10,000 TV adverts a year and recognise 400 brands by the age of 10, as well as being exposed to online adverts often promoting products unsuitable for children, such as gambling and dating. UK Schools Secretary Ed Balls recently announced an inquiry to investigate a suggested link between advertising and increased anxiety, eating disorders, drinking and violent behaviour among youngsters, also noting concerns about the inappropriate ‘sexualisation’ of girls.

Advertising seems to have become the focus of broader anxieties about what the Archbishop of Canterbury has dubbed ‘the growing commercialisation of childhood’. Children’s author Jacqueline Wilson worries that ‘we are force feeding our own materialistic and consumptive culture into their mouths’. Are we creating greedy and materialistic children, too focused on buying and consuming ‘stuff’ to appreciate more innocent pleasures, or do such concerns betray more profound doubts about our ability to pass on meaningful values to the next generation? Do we over-estimate the power of advertising and the media, and underestimate today’s techno-savvy ‘digital natives’. Is it better to be safe than sorry, to have more regulation to protect impressionable children from malign influences? Or should adults chill out and stop over-protecting children?

Children are continuing to be targeted by junk food companies advertising their products over the internet or through "viral" promotions, despite a ban on television adverts promoting unhealthy food to the under-16s.

The safety of children should be a central concern for parents and society as a whole.

I've often thought that the true way these days to tell if someone is middle class is if their children can conceive of no greater treat than a trip to McDonald's.

I want less choice, not more

We shouldn't be treating our children as little consumers. We can now see where this leads.

Children are a captive audience: The average American child watches an estimate between 25,000 to 40,000 television commercials per year.

Ofcom’s definition of media literacy, developed after formal consultation with stakeholders is ‘the ability to access, understand and create communications in a variety of contexts’.

Interim Review of the Media Landscape