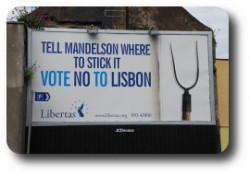 European politicians bemoan the public’s antipathy to the European Union. But what does the EU represent, and why should we want to engage with it? Once, European thinkers rocked the world by imagining a better future built on the ideals of reason, freedom and democracy. Today, they are less likely to dream of a democratic United States of Europe than to invoke dystopic nightmares about threats to our security. Unable to inspire or lead, the EU’s elites corral us in behind bureaucratic regulations and procedures.

Against critics who denounce its lack of idealism and its bureaucratic practices, believers in the EU have often made a virtue of its humdrum nature. The EU should not be ‘loved’ like a nation, they say; that’s not what it’s for. Instead, European cooperation is simply what it takes to manage a world of growing complexity and problems that don’t stop at national borders. Understood in this way, the EU is a symbol of the post-political consensus: we have gone beyond the era of conflicting ideas to one in which objective expertise is needed to cope with cross-border problems of immigration, globalisation and environmental change. Today’s European thinkers argue that ideology and mass politics are dangerous things of the past.

Recently, this defence of the European Union has taken a battering. The ‘No’ votes to the EU treaty in France and the Netherlands in 2005, and Ireland this year, revealed the gulf that separates Europe’s political class from domestic populations. Some observers have hailed a resurgence of populist politics, as publics across Europe react against the isolation and arrogance of their rulers. The EU elites have responded by trying to dampen debate, despite their ongoing concerns about political apathy. Can a populist backlash against technocratic politics be given a progressive direction, or is it only another negative moment in an already anti-political age?

Bruno Waterfield Brussels correspondent, The Times; co-author, No Means No

What next for the EU?, Chris Bickerton

Some say that crisis management is what the EU does best. Rubbish – its exercise of 'soft power' is worse than useless

The Irish Vote No

The results are in and the Irish have voted against the Lisbon Treaty. This obviously has serious consequences for the future of the EU and its institutions. But what of the wider political importance of the Irish "No" vote?

A Stranger in Europe: Britain and the EU from Thatcher to Blair

Britain has been an awkward partner, often at odds with her fellow Europeans: a stranger in Europe. But with dogged determination and seriousness of purpose Britain's leaders have done much to shape and reform the modern Europe in which we live today.


Europe: The State of the Union

The European Union is perhaps the least well understood political system in the world today. Europe: The State of the Union cuts through the jargon to offer a clear and concise assessment of this unique institution.

At a time when democracy seems to be failing - there is low voter turnout and widespread political apathy - a referendum could give citizens back some much needed control over the direction of the EU, and force democratic debate on an issue that up until now has existed beyond national politics.

An epiphany is beguiling Europe. Far from dwindling in historical significance, the Old World is about to assume an importance for humanity it has never, in all its days of dubious past glory, before possessed.

Against the Populist Temptation

The French and Dutch NO to the project of European constitution was a clear-cut case of what in the "French theory" is referred to as a floating signifier: a NO of confused, inconsistent, overdetermined meanings, a kind of container in which the defense of workers' rights coexists with racism, in which the blind reaction to a perceived threat and fear of change coexist with vague utopian hopes.