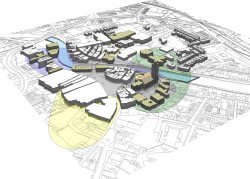 Planning has never been so contentious. Protests about the third runway at Heathrow – or even against the Three Gorges Dam in China – are only the most high-profile. Tens of thousands signed a petition against the eco-town in Sussex; Redcar and Cleveland Council received 6500 objections to a proposed off-shore windfarm. Campaigners against a proposed development near Stratford-upon-Avon, including Dame Judi Dench, allege an ‘undemocratic short-listing process’. Some allege the town councillors who give planning permission are dancing to the tune of property developers or central government.

Some feel we should have a veto in urban planning that affects us, and that consultation is the best way to ensure people have a stake in today’s grand projects.  Crossrail may have been in consultation for twenty years, but it will probably still be built. So is the right decision worth the wait? Kings Cross’ redevelopment took only five years of community discussion and managed to answer most local criticisms. So is consultation so onerous? Critics argue that consultation privileges NIMBYish concerns over expert opinion and the national interest. What happens if elected ‘people’s politicians’ go against architectural expertise?  Mayor of London Boris Johnson says he will personally handle all major development decisions in London, but will he get them right?

From the Eiffel Tower to the Empire State Building to Canary Wharf; from Haussmann in Paris to Robert Moses in New York, visionary urban designs have regularly been driven through by ambitious politicians, architects and masterplanners, without public consultation. Are today’s great architectural visions being thwarted by interfering politicians? Are designers and planners overburdened by the need to consult and win approval? What gives us the best buildings – masterplanning or public consultations? Should we celebrate the ‘making things happen’ mentality, or should we respect public opinion?


Recommended readings
The Planning Bill: a bulldozer through democracy

Whatever happened to accountability? Decisions on big projects will be made by an unelected superquango