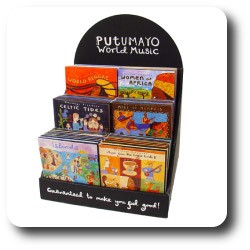 ‘World music’ is an established part of the music scene, played on mainstream radio and frequently performed live; it’s studied at universities and celebrated at the BBC’s annual World Music Awards. For many, it means celebrating of the diversity of humanity while recognising the universality of music. But it is only in recent decades that the idea of ‘world music’ entered the public consciousness, emerging from the WOMAD festivals to be picked up as a brand to sell CDs. ‘World music’ thus comprises everything from African pop to Javanese gamelan, and is generally understood to mean any non-Western music. But does it actually mean anything in musical terms? Is it any more than a marketing label, patronisingly lumping together radically different musical forms to make Western consumers feel good about their exotic musical tastes?

Politicians have called for more music from ‘other countries’ in schools, and a more ‘diverse’ programme at the Proms. But there is surely a mismatch between the desire to embrace other musical traditions, and the discriminating standards necessary to understand and appreciate any form of music properly. Does listening to world music mean we’re embracing a universal, or are we simply being cultural tourists? Should we be worried about the willingness of some ‘world’ musicians to make a career adapting their material for Western tastes? And, in a globalising world, are we in danger of confusing the influence of the market – which now makes all sorts of music available – with the possibility of music that truly speaks to our universal humanity?

Marimba duo and RCM students, Meridian (Eri Kaishima and Jennifer Parkinson), will perform a selection of works that challenge the ‘world music’ label, including pieces by Steve Reich and Vittorio Monti.


Recommended readings
BBC Proms 2008: whistle-stop tour with not much to write home about

This "Celebration of World Music" offered no less than five of the winning acts of this year's BBC World Music Awards.

When you hear the phrase ‘world music’, what do you think of? The krautish desert-throb of Tinariwen? The chirpy Chinese pop-punk of Carsick Cars? Or Charlie Gillett chewing on a piece of bark?

Advances in communication technologies over the last four decades - by which I mean increases in their power, capacity and reach, coupled with their miniaturization and distribution across the social field - have wrought fundamental changes in the way music circulates.

RootsWorld: Listening to the Planet

Our focus is the music of the world: Africa, Asia, Europe, Pacifica and The Americas, the roots of the global musical milieu that has come to be known as world music, be it traditional folk music, jazz, rock or some hybrid. How is that defined? I don't know and don't particularly care at this point: it's music from someplace you aren't, music with roots, music of the world and for the world. OK?