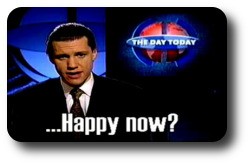 Comedy has always had the capacity to lampoon authority and puncture orthodoxies.  Comedians have often become political reference points: think of the rebelliousness of That Was the Week That Was and Spike Milligan in the 1960s, or Spitting Image and Ben Elton’s anti-Thatcher tirades in the 1980s. Today, however, comedy seems to have lost its political bite. When knowing politicians earn credibility by appearing on Have I Got News For You, can comedy still play a subversive role in exposing the great and the good? When cynicism about authority has become mainstream, what is a radical comedian to do?

In fact, a range of new orthodoxies are rarely the brunt of irreverence. Ben Elton recently accused the BBC of being frightened of ridiculing Islam, and allowing ‘vicar gags’ but not ‘imam gags’. Many so-called ‘edgy’ comedians have largely adopted the same politically-correct stance as the BBC. Brass Eye’s excellent demolition of the child abuse scare some years ago was rare example of comedy really unsettling its audience. Where’s the equivalent challenge to scaremongering about climate change, for example?  ITV’s recent Headcases gleefully made fun of easy targets like Jordan and Posh ‘n’ Becks. But where are the attempts at satirising worthy celebs who have a real impact on politics, like the ever sanctimonious Al Gore, Jamie Oliver or St Bono?

Is self-censorship holding back today’s funniest jokes? Or do such complaints simply open the door to the old reactionary comedy of racists such as Bernard Manning? Should comedians concentrate on being funny and avoid politics altogether, or should there be a higher purpose to comedy than simply making us laugh?

Social critique by stealth: why a subversive heart supplies the veins of all good comedy, Anna Travis

What’s so funny about Barack Obama? Apparently not very much, at least not yet.

How not to do political comedy

Marcus Brigstocke is a candidate for unfunniest man in the universe

Climate change? You're having a laugh

A growing number of comedians are trying to find some humour in global warming. But it's not always easy - and things can even turn nasty.

An Englishman, a Cuban, a Japanese man and a Pakistani were all on a train...

The late Bernard Manning will no doubt be rehabilitated by some as an 'edgy' funny man. But to me, he will always be an unreconstructed bigot.

What's the point of satire when comedians fail to tackle the new taboos?