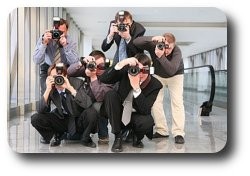 With the growth of digital technology, and with cameras now ubiquitous on mobile phones, photography is no longer the preserve of professionals and a few amateur enthusiasts. But the explosion of photography comes at a time when there are also growing concerns about its ethical implications. Photographers face increasing codes and restrictions on taking pictures in public space. From privacy infringement laws to security concerns and taboos around photographing children, photographers have to navigate a minefield of formal and informal regulations. Yet despite such concerns, we are photographed more than ever before. With photo sharing sites like Flickr, Facebook and Myspace, the personal photo album – which people once would typically show only to a small circle of family and friends – has become an item for public display.

How do the new regulations and taboos affect the role of photographers in documenting public life? How can we strike a balance between safeguarding the artistic and journalistic freedom of photographers, and the privacy of the public? Can individuals in fact create more authentic representations of everyday life by documenting and displaying it themselves? Is the photojournalist redundant now that we can all take pictures with our mobile phones and send them in to eager broadcasters and newspapers? Or should we try to preserve and uphold the superior standards – and ethics – of professional photographers?

View the openlens group on Flickr - a photo pool which aims to highlight the challenges and opportunities for photographers interested in documenting interactions in public space.

A man who took a photograph of an ill woman outside an Edinburgh bar has been fined £100 after being branded "unchivalrous" by a sheriff.

The Web Giveth, The Web Stealeth Away

It’s no secret that Web 2.0 has provided a launch pad to success for people who previously would have found it difficult, if not impossible, to achieve their aims. And nowhere is that more true than in the photo business.

The harassment of press freedom

A law aimed at stopping stalkers is being used against photographers and even as a substitute for libel claims.

"Magnum": Fifty Years at the Front Line of History - The Story of the Legendary Photo Agency

The story of how a small group of photographers - Robert Capa, Henri Cartier-Bresson, George Rodger and David "Chim" Seymour - established and nurtured a co-operative photographic agency that has survived against all the odds to become the most famous in the world.

Digital technology is transforming photojournalism in hot spots around the world.