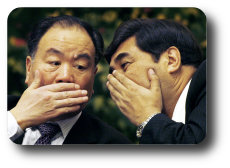 The Beijing Olympics ‘coming out’ party gave a sharp focus to Western concerns about the awakening of the ‘sleeping dragon’; certainly the rise of China is the subject of much debate in the West. With so much of the discussion filtered through the prism of Western preoccupations, however - from fear and loathing, to awe and envy - can we make a balanced assessment of what China really wants, and just what it’s thinking?

What does the dramatic rise of China as a world player mean to China itself?  Rapid industrialisation and urbanisation represent undreamt of prosperity for millions of Chinese people, yes, but is it a dream billions can hope to share? Want to share? How is it that the Chinese today conceive of their project and imagine their future? How do they plan to relate to the rest of the world? Is it all harmonious global growth from here on in? Does that include Taiwan? The autonomous regions? Is their dream that industrial modernity leads naturally to growing freedoms, democracy and public participation? As Western commentators debate whether or not liberal democracy is the best thing or not for China, we should start by asking, would the Chinese even vote for it?

Can we expect Enlightenment scientific rationalism to be an inspiring model, or is Confucius back with a vengenance? Will Chinese social networking sites break new ground that we have not even begun to tread, or just follow in well-worn Western footprints? Is China building the 21st century, or conforming to a Western blueprint?

Recommended readings
The Chinese Dream: A Society Under Construction

What if you built the whole mass of western europe in 20 years? What if 400 million farmers then moved in? What would it look like? How would it work? Would you be able to go to sleep at night? And if you did, would you dream of somewhere else …?

China is pretty well placed to cushion a global downturn

In China, for almost a century, restoring national pride has remained an important theme but more significantly, for the moment, the expert and the manager have supplanted the intellectual as the national standard bearer.

Getting Rich First: Life in a Changing China

The peasant revolutionary turned lifestyle guru, the former Shaolin monk working on a Shanghai building site, the once-conservative father running a gay hotline - and the teenagers who just want to dress up as their favourite Japanese cartoon characters - welcome to the new China, a nation in motion, where whole streets are rebuilt in a week, car ownership is soaring, education goes private and rural workers migrate to the cities in search of a better life.