Claire Fox: we must rail against Leveson’s modern Puritans

Following today’s announcement that the 3 main parties have agreed to a deal for regulating the press following on from the Leveson Inquiry, IoI director Claire Fox has called for journalists to emulate the ‘great heroes of modern liberty’ in refusing to bow to state regulation of the media.

Declaring Lord Justice Leveson ‘the grandee who effectively ended 300 years of press freedom,’ Fox argues that regardless of the form the legislation takes, Leveson’s ‘chilling’ impact as has made it ‘inevitable’ that journalists now face being tamed by ‘the Privy Council, an ancient body which most of us are more familiar with from reading Hilary Mantel’ than ‘a modern democracy.’

Speaking ahead of the Battle of Ideas on 19-20 October, Fox compares the challenge posed by Leveson to John Milton’s attack on Puritan censorship in the Areopagitica, arguing that we ‘must be braver…unashamedly take on our adversaries and loudly proclaim the virtues of a free press.”

The Battle of Ideas will debate the proposals on 20th October at the Barbican in the session ‘Leveson one year on: what future for press freedom?’ 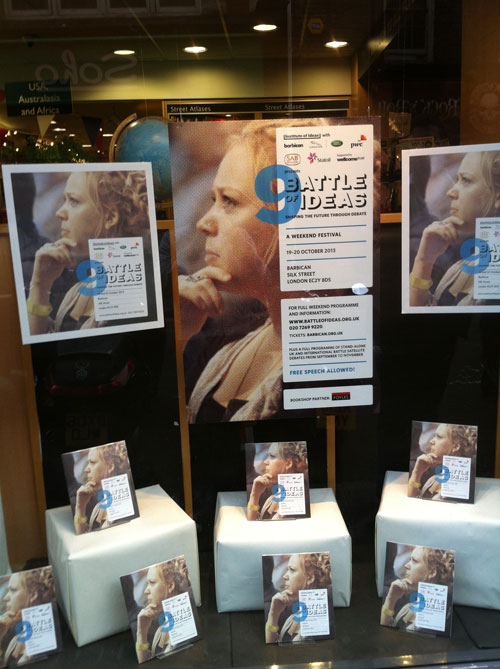 The annual Battle of Ideas display in the window of Foyles Charing Cross is now up, following two successful satellite events at the book shop, on science and society and the right to protest.

Buy your tickets for the Battle of Ideas weekend here.

Tickets can be bought from the Barbican website, here.

Great Battle of Ideas 2013 deal for school pupils
Together with the Hargrave Foundation, we are delighted to make the following special offer to school pupils: a free day-ticket to the Battle of Ideas festival, for either Saturday 19 or Sunday 20 October. And if you want to attend the whole weekend you can do so for just £10 for the other day!

Just email schoolschampion@instituteofideas.com stating which day you would like to attend free, the name of your school and give a postal address to send your free ticket to.

Read why the Battle of Ideas 2013 essay

Claire Fox’s essay Why the Battle of Ideas 2013 argues ‘Untangling the ideas that shape policy and culture in today’s climate of intellectual disorientation can seem like an uphill task. While European politicians quibble about whether President Putin’s aide was right that Britain is a ‘small island nobody pays any attention to’, in the real world it’s the people of Europe who feel that nobody is paying attention, wherever they are from.’

Battle of Ideas 2013 at The Barbican

We are delighted to announced that, for the second time, the Battle of Ideas festival will be held at the Barbican in London. This year the Battle of Ideas weekend will be the third weekend of October: 19-20 October 2013. Put the date in your diary and we’ll see you all there. We are starting to programme the festival now and tickets will be on sale in March - once again the Battle of Ideas will be a focus for Europe-wide intellectual discussions about the key social, artistic, economic, political and scientific issues of our times.

"The 2012 Battle of Ideas at the Barbican was the best ever. It was bustling with interesting people, punchy debates and new ideas. I can't wait for 2013's."
Philippe Legrain, adviser to José Manuel Barroso, President of the European Commission