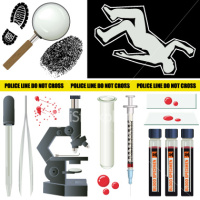 In recent years forensic science has become much more prominent, enjoying widespread interest. It attracts more and more students at university. Forensic scientists have investigated the sites of atrocities of war as well as playing a role in more mundane criminal investigations. Many politicians argue that DNA databases will help fight crime, while in the courts, juries have come to expect increasingly high standards of forensic evidence.

This preoccupation is reflected in the high profile of forensic science in popular culture, especially detective fiction, with ‘forensics’ having taken over from old-fashioned interrogations as the prime means of solving crimes in TV dramas, most notably in the popular CSI franchise: ‘The evidence doesn’t lie,’ we are told. But are there dangers in placing so much authority - social, legal and cultural - in forensic science? What explains its popularity?

Speakers
Produced by
Dr Tiffany Jenkins writer and broadcaster; author, Keeping Their Marbles: how treasures of the past ended up in museums and why they should stay there

Recommended readings
A painful past uncovered

For decades, the whereabouts of thousands executed in Spain under Franco's rule have remained a mystery. Now the exhumation of mass graves is reuniting relatives with their loved ones' remains - and revealing the country's dark history.

Sue Black's job involves rummaging around in mass graves, examining the remains of dead children and identifying people from their severed limbs. The forensic anthropologist tells Julie Bindel about the many secrets revealed by our skeletons and why 95% of her students are female.

Forensics will never be the same again.


All UK 'must be on DNA database'

The whole population and every UK visitor should be added to the national DNA database, a senior judge has said.

Forensic science has become a hot subject due to US television shows such as CSI: Crime Scene Investigation and Law and Order.

The DNA Mystique: The Gene as a Cultural Icon

In highlighting DNA as it appears in soap operas, comic books, advertising, and other expressions of mass culture, the authors propose that these domains provide critical insights into science itself.

"A rare opportunity to debate first hand with those involved in the great issues of our time."
Chris Rapley, director, Science Museum